The Pentagon has broken its silence on the casualties of Monday’s plane crash, involving a US Air Force Bombardier E-11A in Afghanistan’s Ghazni province, and confirmed the deaths of two US airmen.

Lieutenant Colonel Paul K. Voss and Captain Ryan S. Phaneuf died Monday in the crash of a Bombardier E-11A aircraft in Ghazni, central Afghanistan, it said. No other personnel were on board, the US reported.

The US acknowledged that the plane had crashed, but disputed claims by the Taliban that they had brought it down. “The plane, which was on an intelligence mission, was brought down in Sado Khel area of Deh Yak district of Ghazni province,” said Taliban spokesman Zabiullah Mujahid in a statement.

The Department of Defense announced today the deaths of two airmen who were supporting Operation Freedom’s Sentinel, it said in a statement released yesterday.

Claiming that those on board were “high ranking” CIA officers, Mujahid added that “Taliban fighters on the ground counted six bodies at the site of the US plane crash.” 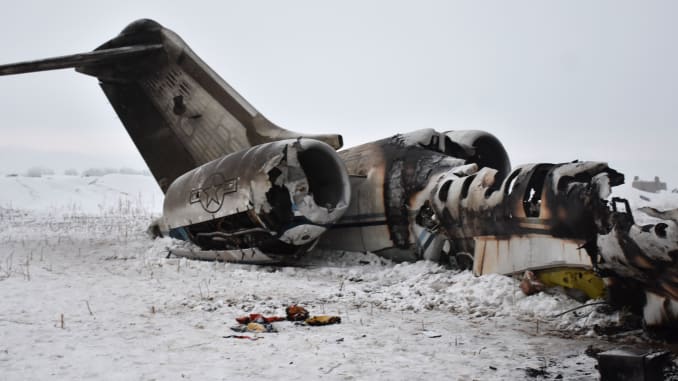 Defense investigative journalist Mikey Kay has claimed that it is common for the crew on such a flight to consist of five officials in addition to two pilots.

It has been reported based on Russian intelligence claims that among those killed was the CIA’s head of the Iran Mission Centre, Michael D’Andrea, who was said to be behind the assassination of Iranian General Qassem Soleimani.

He is also notable for being involved in the hunt for Osama Bin Laden and the joint CIA-Mossad assassination of Hezbollah’s Imad Mughniyeh in 2008.

The US has yet to comment on or deny that D’Andrea was killed.

In reporting the claim of D’Andrea’s death, Iranian state TV used an image of an actor whose character was based on the CIA chief in the film “Zero Dark Thirty”.

The US Navy Seal Team 6 reportedly recovered two bodies and a flight recorder from the site before destroying the plane’s sensitive military equipment. However, Reuters reported that the Taliban had initially prevented the Afghan security forces backed by US military support from reaching the site.

Described as a “WiFi in the sky” and a “spy plane” outfitted with Battlefield Airborne Communications Node (BACN), the E-11A is a Bombardier Global 6000 business jet, modified for the US Air Force. It provides unparalleled communications capabilities to forces on the ground and in the air, especially in mountainous terrains as found in Afghanistan, which can cause communication difficulties.

It was only one of four E-11A aircraft with the BACN payload in the US Air Force and was assigned to the 430th Expeditionary Electronic Combat Squadron which operates solely out of Kandahar Airfield.

Richard Aboulafia, vice president of analysis at the Virginia-based aviation consultancy Teal Group, told Radio Free Europe that the plane was much more significant than an ordinary surveillance or communications aircraft providing “command-and-control battle management” functions and as such was a high-value asset.

There might be people on board analyzing it, disseminating it, transferring it — everything like that. There is a whole host of work involved with signals on the battlefield, he added.

This news was originally reported by The Middle East Monitor.