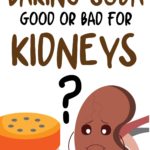 Baking soda is not only an essential kitchen ingredient, it’s also a pure chemical compound with a chemical formula as NaHCO3. Chemically termed as Sodium bicarbonate or simply Carbonate of Soda, the compound is one of the kitchen ingredients with the most versatile uses both inside and outside our cooking space.

While there are a host of health and beauty uses of this miracle compound, in this post however, we will focus on the effects of its consumption on our kidneys.

Important: If you are concerned about any harmful consequences of using baking soda for baking, just rule out your worries as there is no evidence it poses any health risks.

Here is what you will learn after reading this post:

If you rather want to read about the 7 beauty uses of baking soda instead, switch to this post: 7 Beauty Uses of baking Soda You Never Knew Before. Else, let’s start with our today’s talk.

1. Baking soda as a chemical compound

Chemically speaking, baking soda is a compound made up of 4 elements, Sodium, Hydrogen, Carbon, and Oxygen.  Its chemical formula is NaHCO3, which translates to one atom of Sodium, one atom of hydrogen, one atom of carbon and 3 atoms of oxygen chemically bonded to form a molecule of Baking soda. Its an alkaline compound that means it’s basic (opposite of acidic in chemistry) in nature with a 9 value on the pH scale. Too much chemistry in there? Ok, lets not talk about atoms, molecules, pH scale and chemical bonds here, let’s just list it’s chemical and physical properties to understand it better.

2. How does baking soda inflate your batter?

As we said earlier, baking soda is an alkaline compound and when it is heated to a temperature above 50 degrees Celsius, it decomposes into carbon dioxide gas and water. Carbon dioxide being a gas trapped in the batter, inflates it.

3. Effects of baking soda on your kidneys

Let’s not look for myths and fictions, let’s stick to what science and medicine says. Baking soda can be used to help with the following two types of medical conditions involving kidneys.

A study conducted Dr Ione de Brito-Ashurst and colleagues from the Department of Renal Medicine and Transplantation, at the William Harvey Research Institute Barts, and the London NHS Trust in London showed how a small dose of baking soda slowed down the the chronic kidney disease in patients.

In the study, a randomly selected group of 134 patients with chronic kidney disease were taken. Half of the patients were given 600mg of baking soda to take orally 3 times a day over a course of 2 years.

Acidosis is a condition where the acid concentration in the blood increases. It’s actually an acid-alkali imbalance in the blood. While it’s a common condition in people with the chronic kidney disease, there are other factors that may also result in decreasing the blood pH like heart failure, drugs or toxins, kidney failure or diabetic ketoacidosis (caused by high blood sugar resulting from reduced insulin).

In order to understand how baking soda helps with metabolic acidosis, let’s define the condition in terms of PH or simply Acid-alkali balance. If you don’t already know what a pH scale is, it’s the measure of how acidic or basic/alkaline a substance is. The scale is graded from 1 to 14 with 1 being strongly acidic and 14 being strongly alkaline. A PH of 7 and around is considered neutral.

Our blood has a pH of 7.3 -7.5. As mammals we can tolerate a blood pH anywhere between 6.8-7.8. Any pH value below or above this range is highly dangerous and life threatening.

In patients with acidosis, the blood pH drops significantly. If left untreated, further drop in the blood acidity may prove fatal.

Following are the results of a study conducted on by a team of researchers on the effects of sodium bicarbonate therapy on patients with different types of acidosis at the Nephrology Division, Hospital General Juan Cardona, spain.